According to the International Energy Agency the Chemical and Petrochemical sector is by far the largest industrial energy user, “accounting for roughly 10% of worldwide final energy demand and 7% of global GHG (greenhouse gas) emissions.”

The history of chemicals manufacturing reflects the ongoing grind of economic progress: steady improvements in productivity  through myriad small changes in materials and processes, accompanied by periodic game changing breakthroughs — for instance the invention of a new catalytic approach.

The Example of Ammonia: Reaching the End of the “Normal Road”

Ammonia synthesis is one of the most important and largest industries in the world. The Haber Bosch process has been at the heart of ammonia production for nearly a century – and it is energy-hungry: the ammonia synthesis process by itself consumes around 1% of total world energy production and produces roughly 1% of global annual CO2 emissions. Manufacturing the hydrogen which is a key input to the Haber Bosch process  generates a further ~0.5%  of global CO2.

Analysis of the energy efficiency of ammonia synthesis since the early 1900s shows early dramatic improvements in energy efficiency and therefore cost, particularly in the development of the Haber Bosch process in the 1920s. Since that point there were have been only incremental improvements through 2000 and beyond. 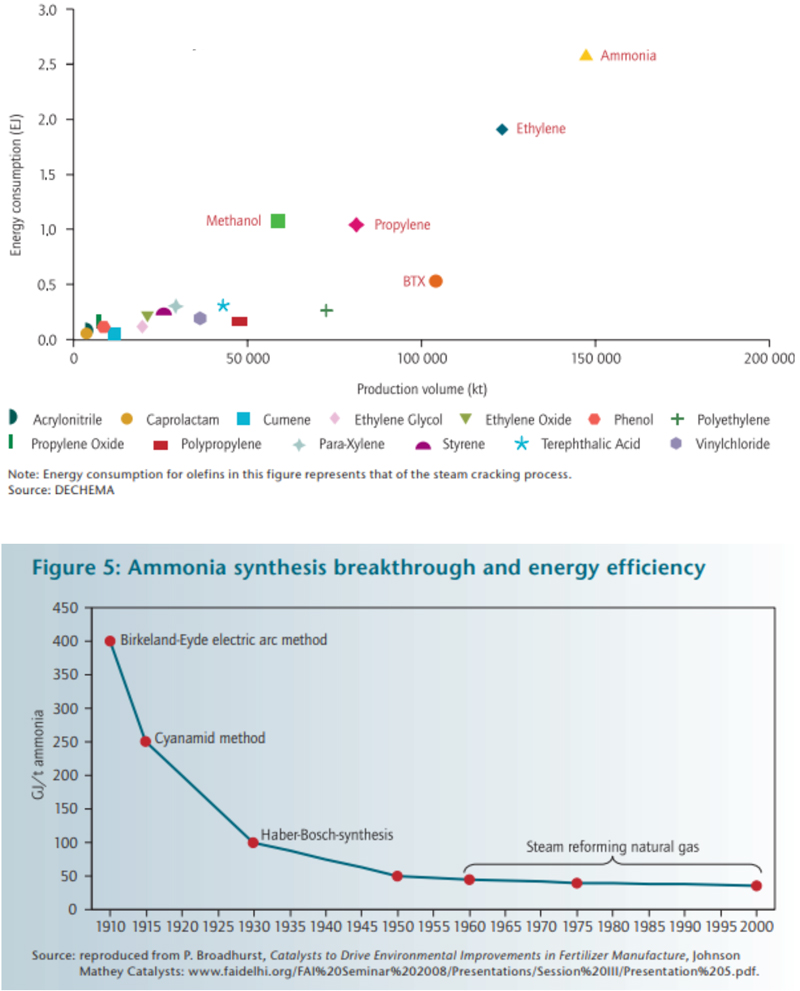 Continuing energetic pursuit of opportunities across the “12 Principles of Green Chemistry”. Enhancement of global effectiveness by larger investment in research and development and more aggressive international sharing of best practices. This is essential but the IEA / ICCA Analysis sees this as a pathway to reducing the energy intensity of chemical manufacturing by between 20% and 40% by 2050. This would be a massive achievement, but it is not enough to meet the generally agreed target of 80%. And that is why we need the second part of the Green Chemicals Revolution: the Game Changers.

GAME CHANGER 1:  Green Transformation of Chemicals Manufacturing Energy Feedstocks; the progress in cost reduction of wind and solar power, in particular, has exceeded expectations — and there is a lot more to come. Cost reductions in related green energy infrastructure, such as electrolysis to convert water into hydrogen and oxygen — are also dramatic as scale increases fast. So when the sun is shining and/or the wind is blowing, the electricity is super low cost and green, and when the sun is not shining and the wind is not blowing, the energy retrieved from storage is still low cost and still green.

Innovations in catalysis have been at the heart of advances in chemicals manufacturing and the emergency and stability of modern industrial economies. According to the Technology Roadmap: Energy and GHG Reductions in the Chemical Industry via Catalytic Processes, about 90% of chemical processes already use catalysis for efficient production, but there is still “enormous potential for further energy savings” through new and improved catalysts and processes.


Giner Labs is a Leader in “Changing the Game”

Giner Labs has been a leader in electrolyzer technologies for over 30 years. In pathbreaking work Giner developed Proton Exchange Membrane Technology which offered world-leading efficiency and performance. In 2020 Giner sold its main PEM commercial business, Giner ELX, to Plug Power. Giner Labs still manufactures specialist PEM stacks and systems for Aerospace and Defense applications, and is pursuing R&D projects in next generation electrolzyer technologies, such as Anion Exchange Membrane (AEM). AEM offers the potential to deliver the performance of PEM without the use of any precious metals and generally lower grade and therefore less expensive stack construction materials.

In combination with low-cost renewable energy , Giner’s electrolzyer technologies offer a clear pathway to achieving lower prices for green hydrogen compared to traditional “grey hydrogen” manufactured by heating natural gas. Major chemical processes requiring hydrogen as a critical input, such as ammonia production, are already beginning to move towards using green hydrogen For instance, in December 2020 Fortescue Metals Group announced it is investigating the development of a 250 megawatt (MW) renewables-based hydrogen plant in Tasmania with associated green ammonia production capacity of around 250,000 tones per annum: the whole project will be based on renewable energy.

Giner Labs is advancing fundamental improvements in catalytic processes, such as the Haber Bosch process for the production of ammonia.

A team led by Giner Labs CTO Dr. Hui Xu and funded by DARPA-E demonstrated a significant performance improvement in the energy efficiency of ammonia production. For the achievements of this team project, Giner was recognized as a "Top Ten Innovator" for 2018 alongside leading companies and institutions such as Tesla, Alstom and UCLA. The award was made by the Japan-based ICEF (innovation for Cool Earth Forum) to Giner and its collaborators on the project, the State University of New York at Buffalo, the University of Delaware, the National Renewable Energy Laboratory in Boulder CO (NREL) and the ARPA-E Program.