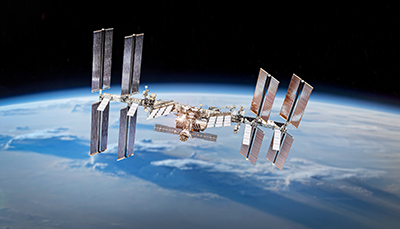 Our family of Static Water Vapor Feed PEM Electrolyzers is a particularly significant accomplishment for space applications because this technology enables a dramatic reduction (>80%) in the weight and complexity of the overall life support system: when you electrolyze water vapor rather than water, the oxygen and hydrogen are produced as a flow of gas, rather than as gasses in a stream of water as is the case with normal PEM electrolysis. This results in a massively more simple balance of plant — no need for pumps and centrifuges to separate the gasses out of the water!

Our electrolyzers have provided decades of reliable service on US Navy Submarines, and have been selected to provide oxygen for astronauts on the International Space Station. They are also being investigated for deeper space missions such as the return to the moon, and missions to mars. 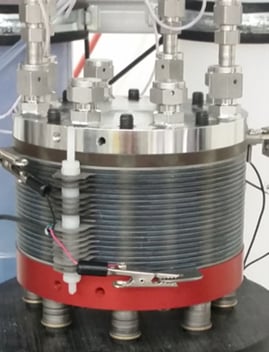 Utilization of available resources such as water, ice and atmospheric gases for life support and propulsion will be critical for long duration lunar missions and the planned mission to Mars. It is simply not feasible to launch rockets to Mars preloaded with return propellant. Similarly, it is not feasible to transport the propellant needed on the moon for repeated trips made by descent and ascent vehicles, and also to power surface vehicles. Life support must also be met through ISRU. Fortunately, there is an abundance of water in the form of ice on Mars, as well as a surprisingly large amount of subsurface ice on the moon. Our development partners have perfected a robust system for the purification of water recovered from these ice stores, which can be split into oxygen and hydrogen using our electrolyzers providing propellant for descent, ascent and surface vehicles; as well as life supporting oxygen.